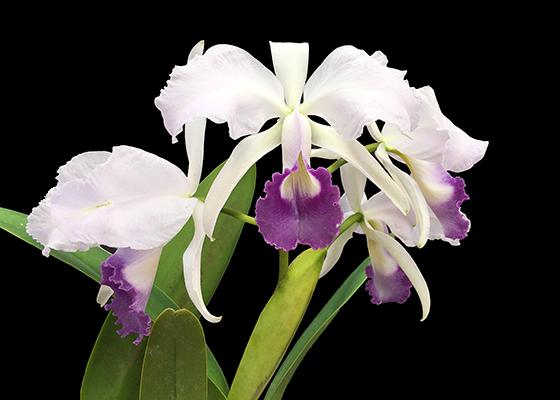 A dreamy primary hybrid, these flowers have rippling petals of crystalline white tinged with lavender-blue, and boldly colorful "blue" lips. From the cross between the coerulea ("blue") color forms of Cattleyas warneri and lawrenciana.

What is a "blue" orchid? The coerulea color form is often described as "blue", a term that confuses many orchid admirers, since most have no truly blue coloration: coerulea simply means the flower lacks red pigment. It is a rare genetic trait, even rarer than fma. alba (orchid albinism), and typically produces some combination of white, purple, and green floral display.

Temperature Tolerant. September-October blooming.
Base blooming size, with one spike, $75. With two spikes, $125.

Plus shipping and handling. 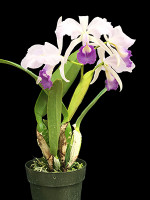 Similar orchids (please contact us for availability and sizes)